To really get to know an island you have to take to the water. Because from here, all the intricacies of a coastline that’s thousands of years old becomes clear. You can see cliffs and caves and crags; stories and history and the present moment, all converging to the sound of lapping waves and the sun peeking over the horizon. Being out at sea brings a certain clarity too, and a palpable sense of freedom that’s hard to beat. That’s why hiring a boat is one of the most popular things to do on Ibiza — there’s nothing like riding the waves with a bunch of your nearest and dearest and an endless deep blue unfolding above and below.

The majority of potential seafarers head across to Formentera for a day spent atop the Med, and no surprises there, the beaches are undeniably beautiful. But there’s plenty to be uncovered in and around the Ibiza’s pristine shores. From private coves, popular sunset spots and towering seaside precipices, to long stretches of fine, golden sand and turquoise waters so clear you can see to the bottom, Ibiza has an abundant amount to offer sea-based adventurers — you just have to know where to find it.

Those setting off from the west coast have an entire trove of treasures to discover. Make haste for the shores of Cala Bassa and Cala Comte, not only because of the gin-clear waters and sugary white sands, but because en route there are plenty of caves ripe for exploring. Pop open a bottle of champers and spend time bobbing about on deck or don a snorkel and dive in — either way there are entire worlds waiting to be exposed. You can even hop out and head to Cala Bassa Beach Club or Sunset Ashram to fuel up on cocktails and snacks. 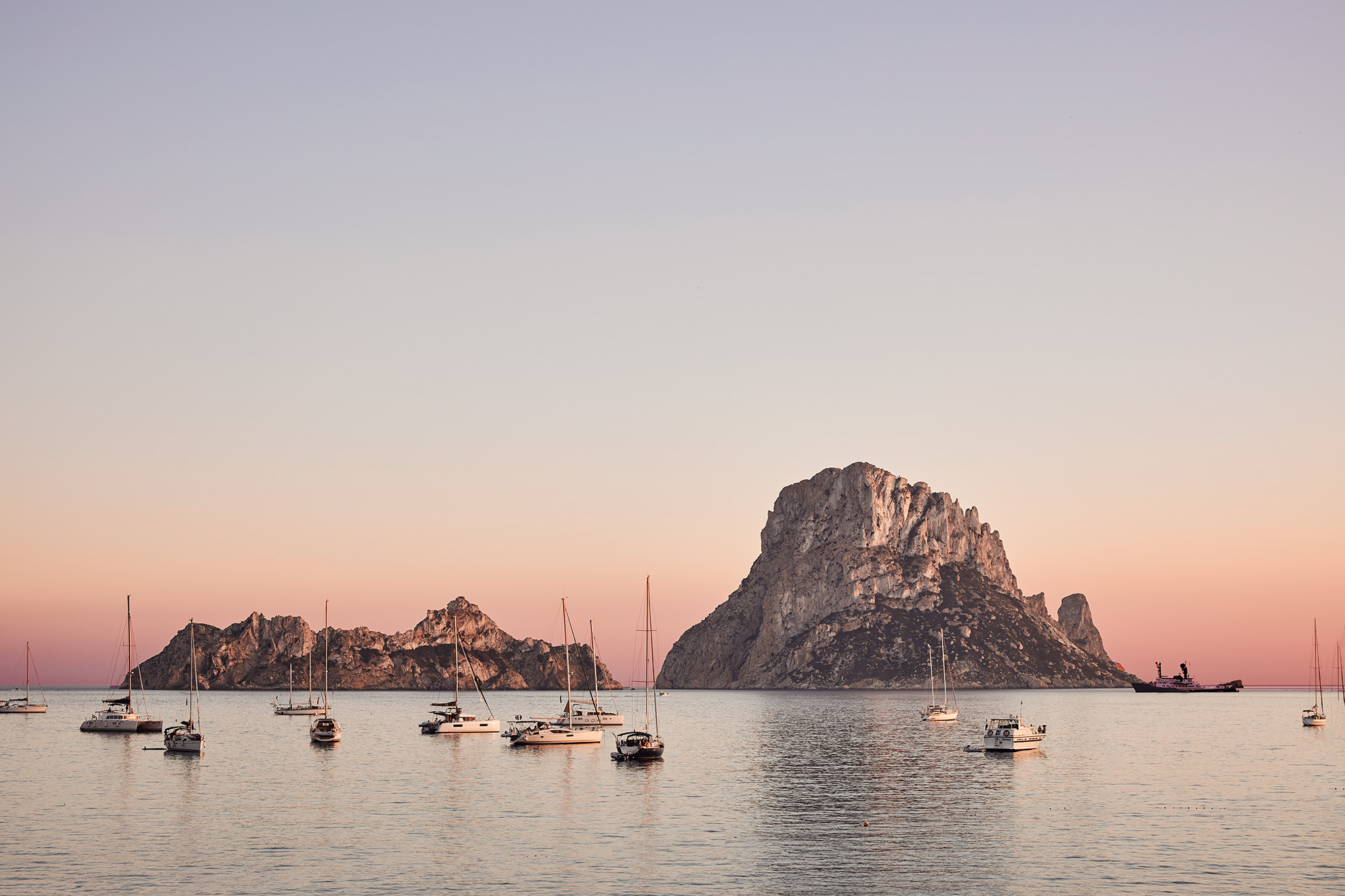 Further down the coast and there’s the mystical rock of Es Vedra. Supposedly the third most magnetic place on earth, this limestone formation is at the heart of much local myth. Once considered the birthplace of Atlantis, not to mention the site of several UFO sightings, there’s an otherworldly essence to Es Vedra that’s all the more detectable when you’re up close. If you decide to do a circuit, keep your eyes peeled for the island’s famous goats, which have supposedly (and unsuccessfully) been removed many times before. And if all that alien chat is too much for you, head to Cala d’Hort instead, there are plenty of first-class beach restaurants there to keep you entertained.

Continue around the coast and you stumble across the vibrant beach of Cala Jondal, home to a selection of the island’s most famous beach clubs. From Tropicana to Yemanja to perhaps the most famous of them all, Blue Marlin, this pebbly beach is the most fun-loving of them all. Throw down the anchor, hail a dinghy and head to shore — just be prepared to get among the party-loving crowd and not reappear till sunset.

Speaking of which, the end of the day should of course be spent back on the west coast, and for all those in the know, off the shores of San Antonio, where crowds gather every night to serenade the sun’s final farewell and the ensuing kaleidoscope skies. For an upbeat vibe, the waters off Café Mambo and the sunset strip can’t be beaten. The world’s best DJs play here every night, so turn down your own speakers and listen to a masterclass reverberating from land. For something a bit more chill, head slightly north to Punta Galera, where the rocks glow orange in the last light of day and the silhouettes of yogis pepper their surface.

Those heading north will have a great time cruising from cove to cove. From the horseshoe-shaped cove of Es Portitxol, which by land involves a 5km hike (much easier to just rock up in a boat), to the crystal clear waters of Cala Xaracca, the lighthouse-flecked rocky coastline of Portinatx, and finally to the shores of Benirras, which on Sunday is home to a bustling market and famous tribal drumming sessions, there’s no end of picturesque spots to make your own for a few hours. Round the top of the island to reach the north-east coast and you should check out the stunning private island of Tagomago, just north of Aguas Blancas, a spot that’s particularly breath-taking as the sun’s rising.

Unfortunately, there simply won’t be enough time to visit all of these in one day, probably best to get that second day booked pronto.

Enquire here for our stylish feature boat FJORD and experience a day you will never forget!