Where better to launch a new product than the crystalline waters and blue skies of Ibiza?  Here at Taste Ibiza, we can help to launch a new product, refresh your brand or organise marketing events. So if you’re about to launch the product of a lifetime, get in touch and we’ll find the ideal location, food, music and people to really make your event sing. We’ve done it many times in the past, and we’ll continue to do it all summer long. All you need to do is give us a brief for what you want and we do the rest.

Leading Luxury PR company B Public Relations contacted us for assistance with a product launch on Ibiza. The product in question was the Bondi Sans Self Tan Eraser; the project was a series of launch events at several key venues over a period of a few days that would launch the product on a global scale. Our role was to produce a bespoke itinerary for each of the nine brand ambassadors attending the events. So, using our contacts, we arranged social gatherings at a number of Ibiza’s leading hotspots. 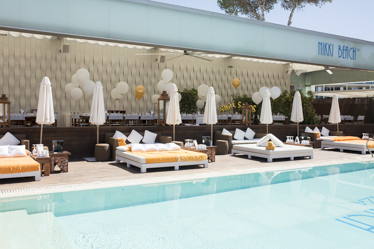 We were contacted by Bondi Sands — one of the leading names in self-tanning — to help them set up the exclusive launch of their latest product, the Self Tan Eraser. Naturally, the company was keen to exploit Ibiza’s spectacular scenery, but it was also important to source a series of on-island locations that would provide stunning Insta-worthy backdrops for the brand’s Global Influencers. Style editors from a selection of the UK’s most famous magazines — including LOOK, OK, Hello, Marie Claire and Cosmopolitan — would also be present, so it was essential to make a great impression.

As soon as the brief was finalised, we went to work on securing space at some of Ibiza’s most exclusive venues. The weekend kicked off at Lío, a Marina Botafoch restaurant and club renowned worldwide for its glitzy cabaret shows. This was exactly the impactful start required for the brand’s Global Influencers, stirring up a buzz on social media with ease. Other venues on the itinerary included STK, a key venue on the island activity that draws a high end movers and shakers, and Pacha, one of the most recognised clubbing brands in the world. Here, we organised VIP tables so the champagne and dancing popped all night, giving everyone involved a sample of a true Ibiza experience. We also took the team out on a luxury catamaran for the day, showcasing the island’s picture perfect waters and placing the product in situ.

For the main event — the launch itself — we turned to Nikki Beach, another famous global brand based near the town of Santa Eulalia on Ibiza’s east coast. The Global Influencers spent the day taking selfies and relaxing on sun beds — generating plenty of content in the process — followed by a luxurious lunch and then a grand unveiling of the new product, which took place in a fully dressed area that we created especially featuring the brand’s colours. The entire event was streamed live on social media by the Global Ambassadors, ensuring maximum coverage was achieved from the get-go.

Thanks to our extensive range of island knowledge and contacts we were able to put together a bespoke itinerary on behalf of Bondi Sands that perfectly met the requirements for the launch of the Self Tan Eraser. The venues hand-selected by us provided a flawless backdrop, not only for the product itself but also for drumming up the coverage needed to create a buzz on social networks. Bondi Sands were thrilled with the results and we were delighted to provide a seamless service that comes naturally to us.